April 29, 2019 / Vancouver, BC / NRG Metals Inc. (“NRG” or the “Company”) (TSX-V: NGZ) (OTCQB: NRGMF) (Frankfurt: OGPN) is pleased to announce positive results from an independent Preliminary Economic Assessment (PEA) for its Hombre Muerto North Lithium Project near Salta, Argentina. The PEA was prepared by Knight Piesold Consulting (KP) and JDS Energy and Mining (JDS), both of Vancouver, in accordance with the standards set out in National Instrument 43-101 Standards of disclosure for Mineral Projects (NI 43-101), and, CIM’s Best Practice Guidelines for Mineral Processing (BPGMP). The PEA is preliminary in nature, and there is no certainty that the PEA will be realized.

Company President and C.E.O Adrian F.C. Hobkirk is quoted: “We are very pleased that NRG has advanced the HMN Project from discovery to PEA in just under twelve months. The PEA results highlight attractive economics associated with the project, including a smaller environmental footprint and manageable CAPEX. We look forward to taking the HMN Lithium Project to the next stage of development as quickly as possible.”

The resource estimate was prepared in accordance with C.I.M. requirements/definitions and uses best practice methods specific to brine resources, including a reliance on core drilling and sampling methods that yield depth-specific chemistry and effective (drainable) porosity measurements. The resource estimation was completed by independent qualified person Mr. Michael Rosko, M.Sc., C.P.G. of the international hydrogeology firm E.L. Montgomery & Associates (M&A), which was announced in a news release dated October 2, 2018, and is summarized as follows:

Tonnages are rounded off to the nearest 1,000. Cutoff grade: 500 mg/L lithium, but no laboratory results were less than the cutoff grade. The conversion used to calculate the equivalents from their metal ions is based on the molar weight for the elements added to generate the equivalent. The equations are Li x 5.3228 = lithium carbonate equivalent and K x 1.907 = potassium chloride equivalent. The reader is cautioned that mineral resources are not mineral reserves and do not have demonstrated economic viability.

The resource is defined over a 3.9 square kilometer footprint using results from core drilling and depth-specific packer sampling.  In addition, the brine was also sampled during short term pumping tests.  The new Measured and Indicated Resource was derived from two polygons surrounding core holes drilled to depths of 401 and 281 meters (m).  Large diameter rotary holes were drilled adjacent to both core holes, each to a depth of about 400 m. The spacing between the two pairs of core/rotary holes is approximately 2.1 kilometers.

Capital Capital costs (CAPEX) have been updated with quotations from current suppliers working in project construction and development in the Puna region of Argentina.  CAPEX estimates include an Indirect Cost of 16.6% of Direct Costs, and a contingency of 17% of Total Costs. 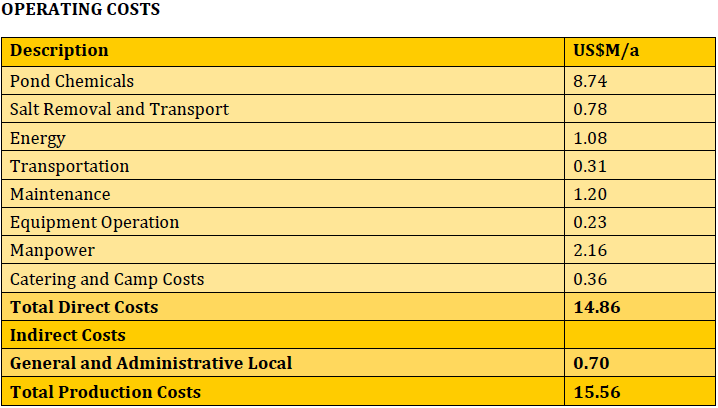 The Project is located at the northern portion of the Salar del Hombre Muerto, at the boundary zone of the Catamarca and Salta provinces, 170 km southeast of the city of Salta.  The project area comprises a collection of properties or concessions acquired under purchase options from the existing owner.  The properties are held as “minas” (full mining licenses not subject to further area reduction requirements) by Mr. Jorge Moreno, a private borate producer focused on the exploration, exploitation and marketing of ulexite.  The Project comprises six properties distributed over the Salar for a total of 3,237 hectares.  All properties are subject to a mining license for borates.  The area of the Property is not subject to any known environmental liabilities.

Lithium prices were based on an average of three years historic pricing and two years forward projections for battery grade lithium. The three-year historic price (to April 2019) is $11,770 /t. Contemporary publicly available reports have published a range of forward pricing that varies between $10,700 to $14,750 /t for the next two years. The median price of $13,400 /t was selected as the forward projected price for each of the next two years. This resulted in a project price assumption of $12,420 /t, which was used as the basis of the study. A range of +/- 20% was evaluated to test the project’s sensitivity to price assumptions.

The PEA models the extraction of the brine containing the lithium resource by means of multiple extraction wells.

The brine will be pumped to a series of pre-concentration and concentration evaporation ponds. Evaporation will increase the lithium content and precipitate or “salt out” species such as Na, K, and Cl. Lime will be added to the pre-concentrated brine to remove bulk impurities such as sulphate as gypsum, which will be physically separated. The final concentrated solution will be stored in lithium surge evaporation ponds then pumped to a hydrometallurgical processing plant to purify the concentrated brine and recover the final product.

The production of lithium carbonate involves the following steps:

It was deemed that the quality of the hydrometallurgical plant-concentrated feed-brine was superior in terms of key impurity to lithium ratios. For this reason, stages such as bulk sulphate polishing (using calcium or barium chloride) were excluded from the process. The need of scavenging precipitation for magnesium using caustic soda was also deemed redundant at this point in time. Instead, a purification circuit was included to ensure adequate purity of the final product, targeted as battery-grade lithium carbonate (99.5% Li2CO3).

The entire lithium recovery process block-diagram from extraction to packaging is illustrated below: 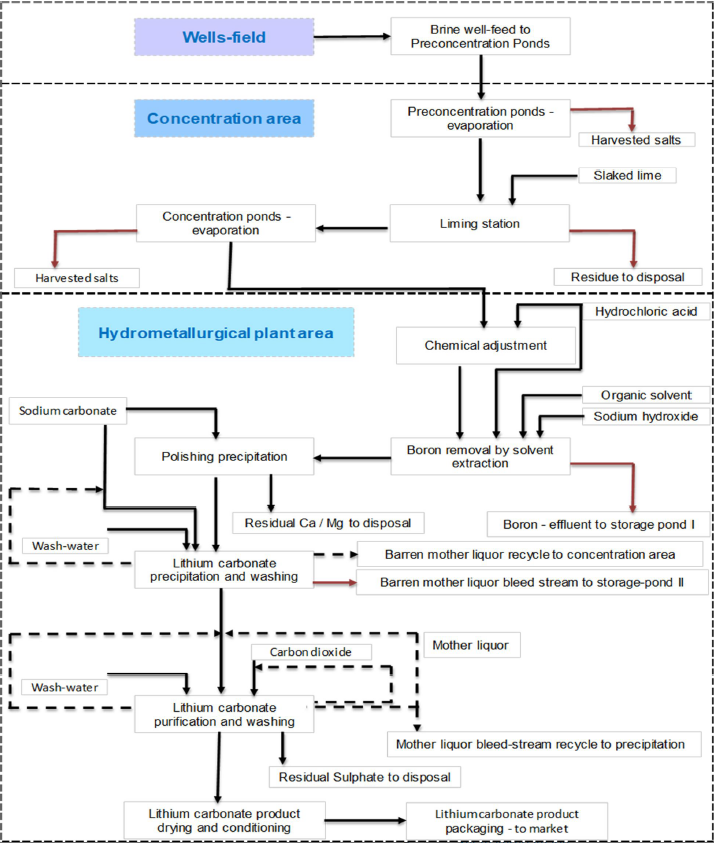 Richard Goodwin, P.Eng., Project Manager for JDS Energy and Mining, Inc., is independent of NRG Metals Inc. and a ‘Qualified Person’ as defined under Canadian National Instrument 43-101.  Mr. Goodwin is a mining engineer and study manager with over 30 years of experience managing mining operation and projects in various commodities such as base metals, precious metals, PGMs, and diamonds in various domestic and international locations.  Mr. Goodwin is responsible for the PEA results, participated directly in the production of this press release, and directly related information in this press release, and approves of the technical and scientific disclosure contained herein.

Alex Mezei, P.Eng, is a ‘Qualified Person’ as defined under Canadian National Instrument 43-101, is responsible for the processing and recovery assumptions used in the preparation of the PEA, which are disclosed in this news release.  Mr. Mezei is a Consulting Metallurgist with extensive experience in base, precious, rare and light metals, including lithium, cobalt, graphite, etc.  Mr. Mezei is independent of NRG Metals Inc.

The P.E.A. is the first step in moving the HMN Project towards potential development.  The process developed for the site is based on conventional, proven technology for brine operations.  The project is located with easy access to energy, and on a salar of development activity. Galaxy Resources Ltd. recently sold the land surrounding the HMN Lithium Project to Korean conglomerate POSCO for US$280 million and are continuing to develop their remaining portion of the salar, referred to as the Sal da Vida Project. The project is located in a jurisdiction that is mining friendly (Salta Province), and the Government of Argentina recently announced reducing the corporate tax rate for mining companies to 25% in 2020.

The final report is expected to be completed within the next 45 days and filed on SEDAR. Pending completion of the report, the Company intends to rapidly advance the HMN Lithium Project to a full feasibility study which will include upgrading the current resource to a reserve status. Pilot test work to develop the basic engineering will be performed with the intent of producing a Battery Grade Lithium Carbonate (99.5% Li2CO3 purity).