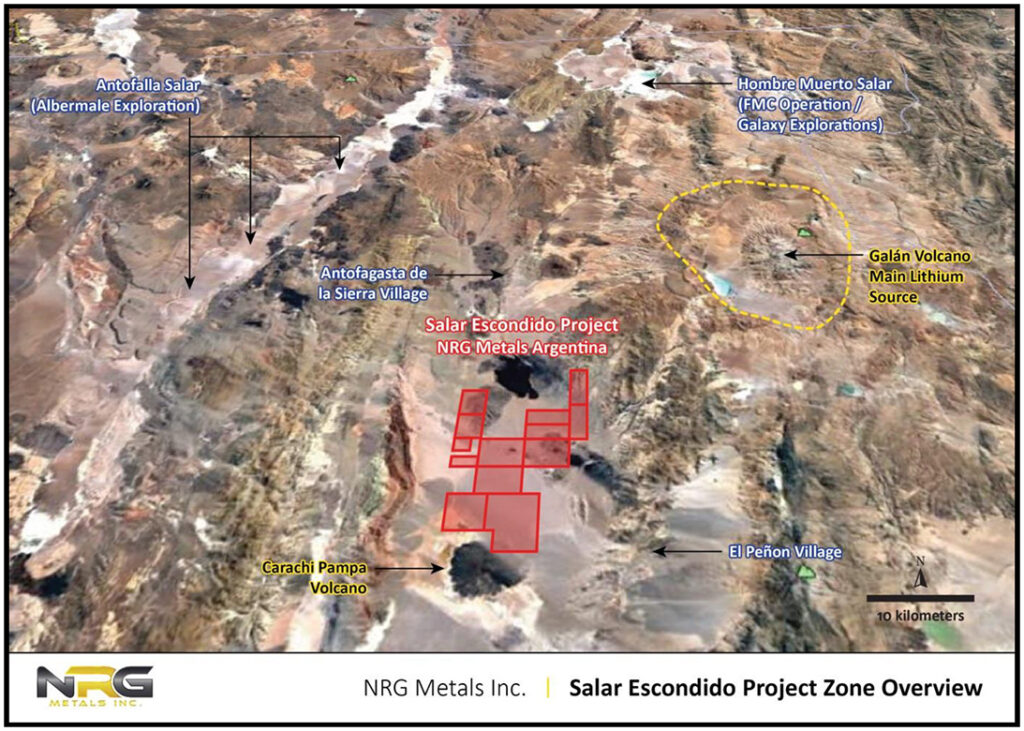 Salar Escondido is a large basin, roughly 20 by 40 kilometers in size, which is mostly covered by a series of overlapping alluvial fans. NRG’s technical team believes that a large salar with an area of at least 700 km2 developed in the basin about 2 million years ago.

After the salar was formed, it was buried by coalescing alluvial fans, and it is thus considered to be a “paleo-salar”. Hence the name Salar Escondido, which means “hidden salar” in Spanish.

Only a small portion of the original brine salar is presently exposed at surface in a small saline lake in the southwest portion of the basin. The brine in the lake contains anomalous lithium values.

As reported in a news release dated November 21, 2016, the Company tested the paleosalar hypothesis by conducting a Vertical Electric Sounding (VES) geophysical survey over the central part of the basin. The survey detected an extensive zone of very low resistivity (shown in pink in the following illustration). Management believes this zone represents a paleo-salar saturated with saline brine that may contain lithium.

Adrian Hobkirk, CEO of NRG Metals commented: “We are very excited about the exploration potential of the large conductive zone that has been identified in an area that contains anomalous lithium values in surface waters. We have assembled an outstanding lithium team, and now that we have the drilling permits in hand, we are excited to move forward and test the Salar Escondido target.”

NRG is in the process of soliciting contractor bids for drilling and will commence drilling a minimum of 600 meters in two core holes as soon as a contractor is selected and field conditions permit. If encouraging lithium values are encountered, NRG will drill at least four additional holes at a grid spacing of approximately five kilometers and also drill larger diameter wells for pumping tests in order to establish a NI 43-101 compliant maiden mineral resource estimate.

On Behalf of the Board of Directors of NRG Metals Inc.
Adrian F. C. Hobkirk President and Chief Executive Officer /ahobkirk@nrgmetalsinc.com
Investor Relations: 855-415-8100

This news release contains certain “forward- looking statements” within the meaning of Section 21E of the United States Securities and Exchange Act of 1934, as amended. Except for statements of historical fact relating to the Company, certain information contained herein constitutes forward- looking statements. Forward-looking statements are based upon opinions and estimates of management at the date the statements are made, and are subject to a variety of risks and uncertainties and other factors which could cause actual results to differ materially from those projected in the forward looking statements. The reader is cautioned not to place undue reliance on forward-looking statements. The transaction described in this news release is subject to a variety of conditions and risks which include but are not limited to: regulatory approval, shareholder approval, market conditions, legal due diligence for claim validity, financing, political risk, security risks at the property locations and other risks. As such, the reader is cautioned that there can be no guarantee that this transaction will complete as described in this news release. We seek safe harbor.