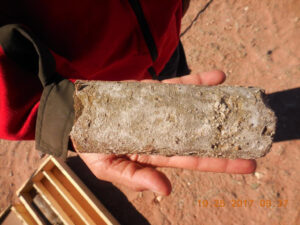 As of Saturday October 28, 2017, AGV Falcon Drilling SRL, completed 170 meters of drilling on the first drill hole of an anticipated initial round of six drill holes planned at the project. At 108 meters the hole intersected an aeolian sand horizon, and saline brine is present below a depth of 140 meters. Drill core extracted from a depth of 160 m exhibits very vuggy and porous sandstone with halite (common NaCl salt) efflorescence. The efflorescence is indicative of saline brine that has precipitated when exposed to air, indicating that the pores and cavities were filled with saline brine. Drilling is continuing, and packer sampling is commencing.

Mr. William Feyerabend, Certified Professional Geologist # 11047 , a member of the American Institute of Professional Geologists, has been retained to act as on site Qualified Person for the sampling program. Mr. Feyerabend has extensive experience in the exploration of lithium, and recently acted as the author for NI 43-101 Technical Reports for Lithium X.

The Salar Escondido is a large basin, roughly 20 by 40 kilometers in size, which is mostly covered by a series of overlapping alluvial fans. NRG’s technical team believes that a large salar with an area of at least 700 km2 developed in the basin approximately two million years ago. After the salar was formed, it was buried by coalescing alluvial fans, and it is thus considered to be a “paleo-salar,” hence the name Salar Escondido, which means “hidden salar” in Spanish.

NRG Metals Inc. is an exploration stage company focused on the advancement of lithium brine projects in Argentina. In addition to the Salar Escondido lithium project, the Company is evaluating the 3,287 hectare Hombre Muerto North lithium project (“HMNLP”) in the province of Salta. The HMNLP is located at the northern end of the prolific Hombre Muerto Salar, adjacent to FMC’s producing Fenix mine and Galaxy Resources’ Sal de Vida development stage project. As announced in a press release dated July 13, 2017, the Company has filed an Environmental Impact Study and applied for permits to drill the HMNLP. In addition, the Company is currently reviewing the exploration program as outlined in the NI43-101 report that was filed on Sedar on October 16, 2017.

On Behalf of the Board of Directors

This news release contains certain “forward- looking statements” within the meaning of Section 21E of the United States Securities and Exchange Act of 1934, as amended. Except for statements of historical fact relating to the Company, certain information contained herein constitutes forward- looking statements. Forward-looking statements are based upon opinions and estimates of management at the date the statements are made, and are subject to a variety of risks and uncertainties and other factors which could cause actual results to differ materially from those projected in the forward looking statements. The reader is cautioned not to place undue reliance on forward-looking statements. The transaction described in this news release is subject to a variety of conditions and risks which include but are not limited to: regulatory approval, shareholder approval, market conditions, legal due diligence for claim validity, financing, political risk, security risks at
the property locations and other risks. As such, the reader is cautioned that there can be no guarantee that this transaction will complete as described in this news release. We seek safe harbour.