September 18, 2017 / Vancouver, BC / NRG Metals Inc. (“NRG” or the “Company”) (TSX-V: NGZ) (OTCQB: NRGMF) (Frankfurt: OGPN) is pleased to announce that it has awarded the contract for the initial drilling at its Salar Escondido lithium project in Catamarca province, Argentina to AGV Falcon Drilling SRL of Salta, Argentina. AGV has extensive experience in the drilling of salar targets in Arentina, including the Rincon, Cauchari and Rio Grande salars. Drilling on the first hole, which is targeted to be drilled to a depth of 350 m, will commence in late September or early October after a shallow drill water well has been completed. 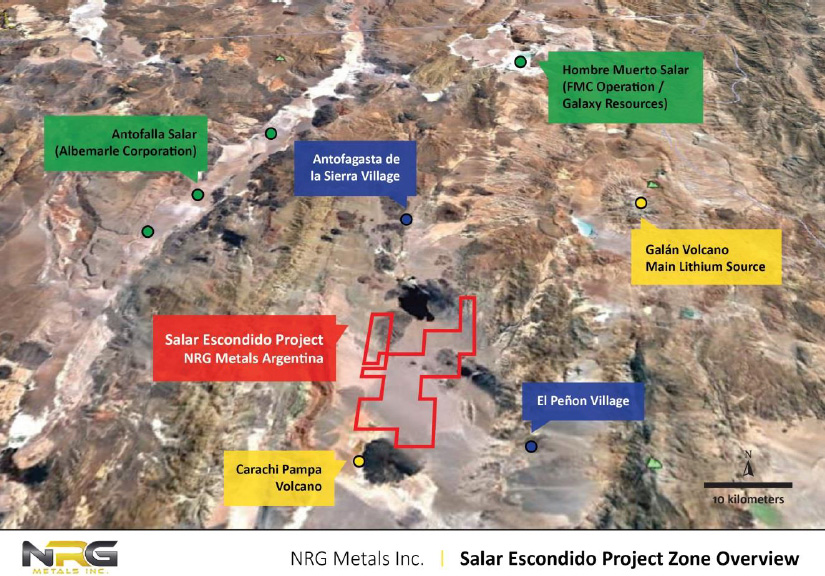 As previously reported, Salar Escondido is a large basin, roughly 20 by 40 kilometers in size, which is mostly covered by a series of overlapping alluvial fans. NRG’s technical team believes that a large salar with an area of at least 700 km2 developed in the basin about 2 million years ago. After the salar was formed, it was buried by coalescing alluvial fans, and it is thus considered to be a “paleo-salar.” Hence the name Salar Escondido, which means “hidden salar” in Spanish. Only a small portion of the original brine salar is presently exposed at surface in a small saline lake in the southwest portion of the basin. The brine in the lake contains anomalous lithium values.

In 2016, the Company tested the paleo-salar hypothesis by conducting a Vertical Electric Sounding (VES) geophysical survey over the central part of the basin. The survey detected an extensive zone of very low resistivity (shown in pink in the following illustration). The Company believes this zone represents a paleo-salar saturated with saline brine that may contain lithium.

Adrian Hobkirk, CEO of NRG Metals commented: “We are very excited to commence drilling at Salar Escondido and test the exploration potential of the large conductive zone that has been identified in an area that contains anomalous lithium values in surface waters. AGV Falcon Drilling has extensive experience drilling salar brine deposits, and welook forward to working with AGV Falcon to explore Salar Escondido.”

On Behalf of the Board of Directors