April 12, 2018 / Vancouver, BC / NRG Metals Inc. (“NRG” or the “Company”) (TSX-V: NGZ) (OTCQB: NRGMF) (Frankfurt: OGPN) is pleased to announce that a drill rig and camp are now on site at the 29,180 hectare (72,100 acre) Salar Escondido Lithium Project located in Catamarca Province, Argentina. NRG technical staff, including a senior hydrologist and geologist have been located near site, and drilling will begin shortly.

Water Drilling of Catamarca, Argentina are contracted to drill an 8.5-inch diameter rotary hole up to a depth of 400 m. The hole will be located approximately one kilometer south of the Company’s initial diamond drill hole, which was completed to a depth of 307 m in December 2017.

During 2017, NRG’s drilling confirmed the presence of a buried brine zone beneath the alluvial cover on the surface of the basin. Brine was intersected at a depth of 140 m, and as reported in the Company’s press release dated December 7, 2017, sampling from 183 to 198 m returned an average grade of 229 mg Li/liter in a porous, weakly consolidated sandstone horizon. A Vertical Electrical Sounding (VES) geophysical survey conducted by the Company suggests that the brine zone occurs at an even shallower depth where the upcoming hole will be drilled.

The Salar Escondido project is located approximately 280 kilometers northwest of Catamarca, Argentina. Further details are available at the company website at www.nrgmetalsinc.com, and a National Instrument 43-101 Technical Report was filed on SEDAR in December 2016. 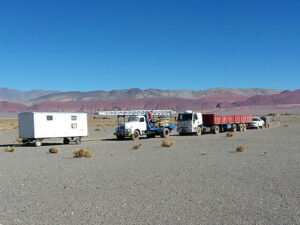 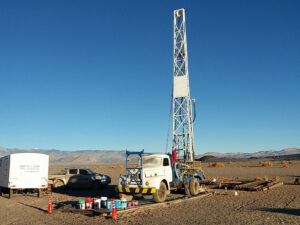 NRG Metals Inc. is an exploration stage company focused on the advancement of lithium brine projects in Argentina. In addition to the Salar Escondido project, the Company is planning to shortly commence drilling at its 3,287 hectare (8,100 acre) Hombre Muerto Norte lithium project (“HMN”) in Salta province. The HMN project is located at the northern end of the prolific Hombre Muerto Salar, adjacent to FMC’s producing Fenix mine and Galaxy Resources’ Sal de Vida development stage project. A NI 43-101 report for HMN was filed on SEDAR in October 2017.

The preparation of this press release was supervised by Mr. James K. Duff, a Licensed Professional Geologist and a Registered Member of the Society for Mining, Metallurgy and Exploration and a Qualified Person as defined under National Instrument 43-101. Mr. Duff approves the scientific and technical disclosure contained in this press release.