June 5, 2017 / Vancouver, BC – NRG Metals Inc. (“NRG” or the “Company”) (TSX-V: NGZ) (OTCQB: NRGMF) (Frankfurt OGPN). ). The Company is pleased to announce that it has entered into an option agreement to purchase the Hombre Muerto North Lithium Project, located in Salta and Catamarca Provinces, Argentina. The property package of 3,287 hectares is comprised of the Alba Sabrina, Tramo, Natalia Maria, Gaston Enrique, Viamonte and Norma Edit concessions, all located in the Salar del Hombre Muerto in northwestern Argentina.

Highlights of the Hombre Muerto North Lithium Project Include:

The location of the project and the concessions is shown on the map below. The western part of the Salar del Hombre Muerto is host to FMC’s Fenix Mine (~20 km south of the Hombre Muerto North property), which has been producing lithium for over twenty years, and Galaxy Resources is developing its Sal de Vida lithium project in the eastern part of the salar.

“We are very excited to be able to lock-up this project in the preeminent lithium brine production and development area in Argentina. NRG has a highly qualified, Argentina-based team of professionals experienced with lithium exploration, development, through to lithium production.”

In October 2016 and January 2017 (January was a rainy season month), a total of 20 surface geochemical samples were collected under the supervision of Nivaldo Rojas, who is an independent Qualified Person (as defined in National Instrument 43-101).  The samples range from 48 to 1,064 mg/L Li and averaged 587 mg/L Li. The average Mg/ Li ratio is 4.63:1. 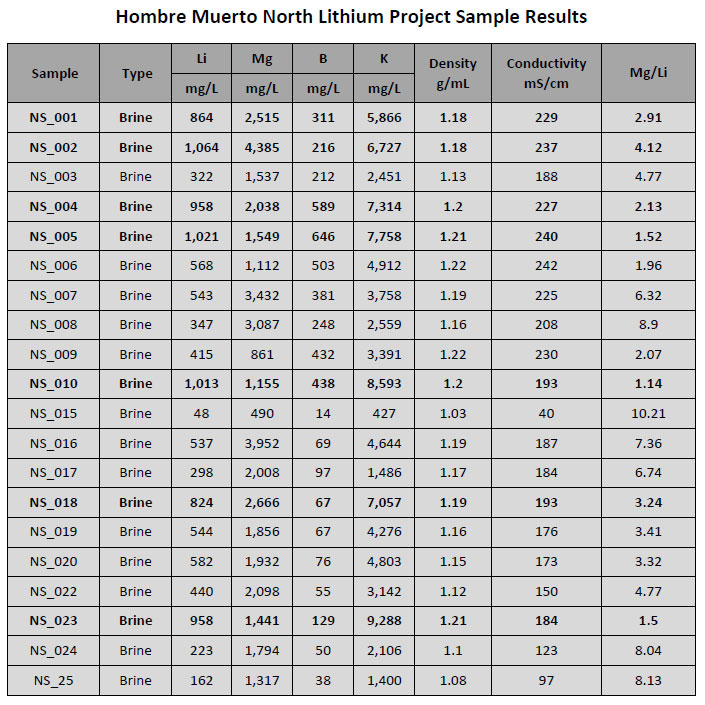 Sample results indicate that the near-surface brines contain high lithium and potassium values with relatively low magnesium values.  Surface samples were collected from pits excavated by hand and then drilled to up to 2.4 meters below surface with a manual auger. All assays were analyzed by Alex Stewart Assayers, an ISO certified laboratory located in Mendoza, Argentina. 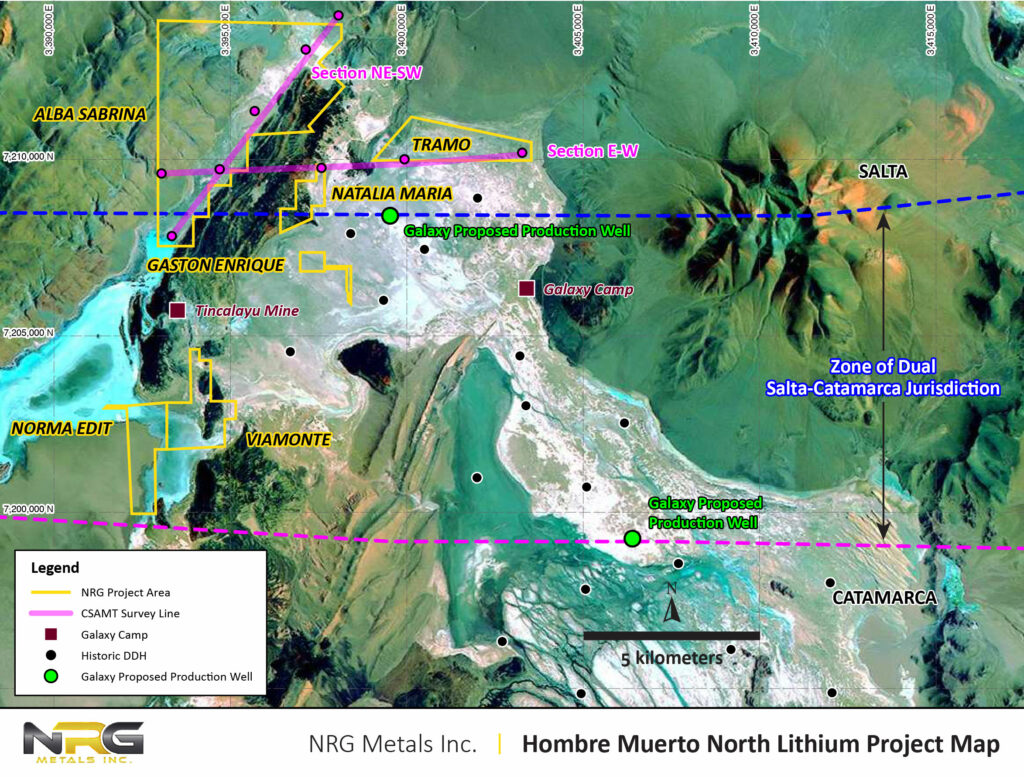 The Salar del Hombre Muerto has been extensively evaluated by both FMC and Galaxy Resources. Galaxy Resources acquired the Sal de Vida project when it merged with Lithium One. In a 43-101 Technical Report dated March 7, 2012, Lithium One provided a detailed log of diamond drill hole SVH11-21 with assay values that ranged from a low of 564 mg/L Li to a high of 895 mg/L Li over the 95m length of the hole. That hole is located 750 m south of the Tramo concession.  In a press release dated April 10, 2017, Galaxy Resources announced the initiation of production-well drilling at Sal de Vida, approximately two km south of the Tramo concession.

Given robust exploration, development and mining activity in the area, access to key infrastructure is excellent.  Provincial Route 17 passes within 10 km of the project, a 600-megawatt power line between Salta and Mejillones, Chile is 160 km to the north, and a natural gas pipeline connecting mining operations in the Puna region is within 10 km.  A railroad line between Salta and the Chilean sea port of Antofagasta that is being reactivated is 100 km north of the Hombre Muerto North property. Company technical management are currently reviewing all available data, and will be providing further details in the immediate future.

The project is being acquired through a purchase option agreement from a private borate producer from Salta, Argentina named Jorge Moreno.  Mr. Moreno is a well-known businessman in the region, with interests in mining and agriculture.  He has been involved in the production and exportation of borates for more than 20 years, and he is also involved in the provision of logistical and mining services for remote projects.  In 2016, he was one of the vendors of the Pastos Grandes Project to Millennial Lithium.

Terms of the acquisition are US $5.65 million in cash payments and 10 million NRG Metals Inc. common shares staged over a 54- month period. The payment schedule is as follows:

NRG Metals Inc. is an exploration stage company focused on the advancement of lithium projects in Argentina. Company management are highly qualified in the exploration and development to production, of lithium brine projects. In addition to the Hombre Muerto North Lithium Project, the Company is evaluating the 29,000 hectare Carachi Pampa Lithium Project in the province of Catamarca, which is in the final stage of drill permitting.

On Behalf of the Board of Directors of NRG Metals Inc.

TECHNICAL DISCLOSURE
The technical and scientific disclosure contained in this press release is approved by Nivaldo Rojas, B.Sc. Mining Engineering (Universidad de Atacama, Copiapo, Chile) of Rojas & Associados, Mining Consultants of Mendoza, Argentina.  Mr.Rojas is a Qualified Person as defined under National Instrument 43-101, and is a Fellow of the Australasian Institute of Mining and Metallurgy. He is independent of NRG Metals Inc. and the vendor, Jorge Moreno, within the meaning of Canadian National Instrument 43-101. Mr. Rojas visited the site October 3-5, 2016 when he was contracted by Mr. Moreno to supervise collection of surface geochemical samples. Mr. Rojas supervised the preparation of this press release and approves the scientific and technical disclosure contained herein.

This news release contains certain “forward- looking statements” within the meaning of Section 21E of the United States Securities and Exchange Act of 1934, as amended. Except for statements of historical fact relating to the Company, certain information contained herein constitutes forward- looking statements. Forward-looking statements are based upon opinions and estimates of management at the date the statements are made, and are subject to a variety of risks and uncertainties and other factors which could cause actual results to differ materially from those projected in the forward looking statements. The reader is cautioned not to place undue reliance on forward-looking statements. The transaction described in this news release is subject to a variety of conditions and risks which include but are not limited to: regulatory approval, shareholder approval, market conditions, legal due diligence for claim validity, financing, political risk, security risks at the property locations and other risks. As such, the reader is cautioned that there can be no guarantee that this transaction will complete as described in this news release. We seek safe harbor.